The list of accepted candidates of the third version of Master "Religion, politics and citizenship"

International conference at the University of Seville on the theme: values and crises of contemporary society

Granada Institute for Research and Graduate Studies is an independent non-profit cultural and intellectual academic institution, aiming to contribute to building a scientific space dominated by objective scientific research controls and values ​​of cultural renewal and the principles of pluralism, coexistence, tolerance and cooperation, through the adoption of complementary approaches between scientific disciplines to ensure the revitalization of scientific and cultural movement and promote the studies of civilization Islamic and Western civilization and the consolidation of the values ​​of scientific cooperation and common humanity. The Institute is based in the city of Granada, as a city of symbolic historical significance, it is one of the most important cities of Andalusia, as its name symbolizes the ages of Islamic prosperity, scientific and civilization, as well as the constructive cultural cross-fertilization between Islamic and Western cultures.
Chair Programs

Co-director of the series Violence in Islamic Thought (EUP, 2015), to which authors will join in the next two years. Project Manager Understanding Sharia: past and present; a European cooperation project that brings together experts in violence, customs, laws and the State.

He has been a professor at the universities of Seville, Granada, Autónoma de Madrid and Complutense, and has chaired the Spanish Association of Arab Studies and the Hispano-Arab Friendship Association. He received numerous scientific and cultural awards, including the Prize of Solidarity with the Arab world. He has also received different honorary awards from different universities. In 2010, he won the Andalusian gold medal. Montávez was the director of the Spanish Cultural Centre in Cairo between 1958 and 1962, rector of the Autonomous University of Madrid from 1978 to 1982, has published numerous books on the world, history and Arabic literature, and on Al-Andalus and has translated to the Spanish works of the main contemporary Arab poets, such as Mahmoud Darwish, Nizar Qabbani and Gibran Khalil Gibran. He has written a book entitled “The poem is Palestine”, in 1980, which was published in Arabic and Spanish.

Professor at the Faculty of Governance, Economic and Social Sciences in Rabat.

Researcher in political Islam, history of political thought, questions of religion, politics and cultural diversity. He has worked as an expert in ISESCO and as vice president of the General Secretariat of the Federation of Islamic World Universities that has approximately 300 universities. Mr. Mohamed Bensalah is also co-director of the Chair of Studies in Islamic Civilization and Renewal of Religious Thought of Granada, visiting professor in Master: Islam in the present times: Trends of Islamic thought and management of coexistence and diversity of the University of Granada and co-director of the Master, visiting professor at the University of Padua and the University of Eastern Piedmont in Italy.

He was born in Paris on July 8, 1921. He is considered one of the great thinkers of our time, since his works have repercussion worldwide. He joined the National Centre for Scientific Research in 1951 and is currently active as co-director of Arguments et Communication. In 1970 he was appointed director of Research at the National Centre for Scientific Research at the Higher School of Social Sciences (1973-1989). He directs the European Agency for Culture (UNESCO) and chairs the Complex Thought Society. He has an honorary doctorate from more than 30 universities around the world, in areas such as psychology, political science, sociology, anthropology and pedagogy.

He graduated from the Faculty of Theology at the University of Al-Azhar and received a PhD in philosophy from the University of Tübingen, Germany. He has published numerous works on Islamic thought, including: nation, community and power, concepts of the communities of Islam, contemporary Islam, community, society and state, contemporary Islam policies, Islam conflict, Arabs and Iranians, German orientalists, Times of change: religion, state, political Islam.

Professor of Islamic Studies at the University of Strasbourg.

He is a professor at other institutions, such as at the Catholic University of Leuven. He is a specialist in Sufism, he also works on questions of spirituality in the modern world. Many of his works have been translated into different languages. He is also president of the International Foundation “Mystic Awareness”.

Dr. Asma Lamrabet is a researcher in the field of women and Islam.

She is president of the Centre for Studies and Research on Women’s Issues in Islam, affiliated to the Muhammadiyah Scholarship Association in Morocco. She was the coordinator of the Research and Thought Group on Muslim Women and the Dialogue between Cultures in Rabat between 2004 and 2007. In 2008, she was appointed president of the International Group for Studies and Thinking on Women and Islam, based in Barcelona. She is currently a member of its Board of Directors. She also worked as a volunteer doctor in public hospitals in Spain and Latin America, particularly in Santiago and Mexico, and currently works as a specialist in the diagnosis of leukaemia in the ligament. She won the Arab Women in Social Sciences Award in 2013 for her book in French entitled “Femmes et hommes dans le Coran: quelle égalité?”

He was the President of the University of Mohammed V in Rabat on behalf of 2000 to 2001. He was also Dean of the Faculty of Arts and Humanities at Mohammed V University, between 1998 and 2006. He is a specialist in Islamic and Western political thought.

Professor of Philosophy and Social Studies at the University of Nouakchott, Mauritania. He is a visiting professor in several Arab and international universities of modern philosophy, philosophy of ethics, politics, religion, philosophy of law, linguistics, Islamic philosophy, philosophy of communication and information science. Dr. Abdullah has worked as Coordinator of Arab Islamic Culture and Dialogue of Civilizations (ALECSO 2001-2001), Advisor of the Superior Council of Communications (2006-2011), Expert in Human Development at the United Nations and General Secretary of the Mauritanian Society of Philosophical Studies. He has published several scientific works in the fields of contemporary philosophy and questions of democratic transformation.

Professor of the Department of Arab and Islamic Studies of the Autonomous University of Madrid.

He has worked as cultural affairs officer at the Islamic Cultural Centre of Madrid. He is a researcher of Arabism and orientalist studies, and has many works.

Professor of Spanish Literature at the University of Mohammed V - Rabat

Professor of the Department of Arab and Islamic Studies of Universidad Autónoma of Madrid.

University of Mohammed V of Rabat. Member of the International Association of Political Anthropology of New York, president of the Policy Center of North Africa, former editor of the Journal of Economics and Society, member of the Advisory Board of the Arab Thinking Foundation and visiting professor at several Arab universities and European. He has also directed several academic institutions, including the Regional Center for Education in the East, the Academy of Education and Training in Marrakech and the Academy of Education and Training in Dekala Abda. He has several publications and articles in specialized magazines in Arabic and French. He has received numerous scientific awards, including the Grand Prize of the Book of Morocco and the Barcelona Writing Award difference.

Tunisian writer and thinker, and professor of higher education specialized in the interpretation and history of philosophy at the University of Tunis.

Academic, critic and Iraqi University Professor. He is currently working as a cultural consultant at the Ministry of Culture of Qatar.

He has published fifteen books and more than forty articles in the main Arab magazines. He participated in dozens of conferences and seminars and critical and intellectual forums. He has been a professor of literary studies at Iraqi, Libyan and Qatari universities since 1991. He is an assistant researcher in the History of Arabic literature at Cambridge. 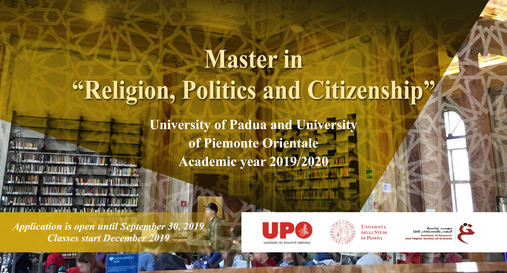 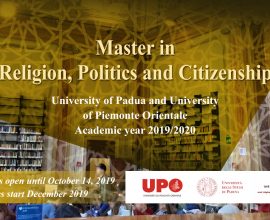 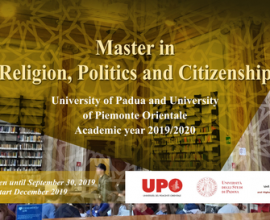 Application is open until September 30, 2019 for Master «Religion,Politics and Citizenship» Academic year 2019/2020 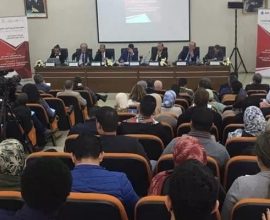